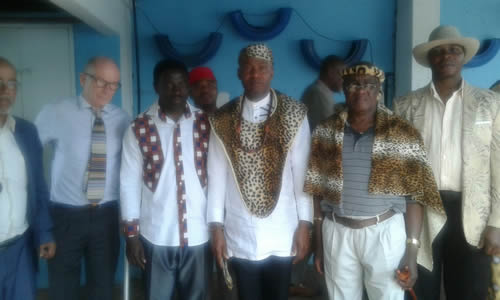 On Friday December 15, the African Diaspora Forum (ADF) took stock of 2017, with officials of the migrant’s rights organisation reminiscing on a very hectic, yet productive year gone by.

The statement and report was shared and presented at two special events that took place during the day.

The first event took place at the Embo Nation’s offices in Bramley, Johannesburg and was attended by representatives of various organizations that strive to promote African Unity. The organisations included rational Pan -African movements and those fighting against Xenophobia and Afrophobia. The event was also attended by the ADF’s senior leadership and Embo Kingdom’s representatives, led by King Bhungane III, from Mpumalanga.

This meeting forged a formal partnership between the two groups, which will tentatively be formally announced to the World in January 2018. The Partnership will develop a plan of action to advance critical issues affecting migrants in South Africa and around the continent, such as xenophobia, the Slave Trade and Human Trafficking in Libya, against which partnership recently organized a March resulting in the presentation of a Memorandum of demand to the South African Presidency, European Union, Pan African Parliament, African Union and Libyan authorities.

The second event was the ADF end of the year party, held inside the organisation’s offices in Yeoville and attended by ADF Executive Committee, the Head of the European Union Commission to South Africa, Ambassador Marcus Cornaro, King Bhungane III of the Embo Nation, a wide range of representatives from different African communities and formations in South Africa and African at large.

In his remarks, ADF Chairperson Mr. Marc Gbaffou stated that “the concerns and interests of our brothers and sisters in South Africa and around the Continent are of critical interest to ADF”. That is why the Slave Trade in Libya energized us to organize the March to Union Building with limited resources and within a very short time.

“This past year we have engaged decision makers in South Africa and throughout the continent to defend and protect the interests of our people. We have scored some successes, but we still have a lot of work to do as we go into the next year. We would like to thank everyone who has supported our work and we look forward to the next year as we build on our past success and forge new partnerships.” said Gbaffou.

The African Diaspora Forum is using this opportunity to wish you and your loved ones a merry Christmas as well as a Prosperous and Happy New Year 2018.