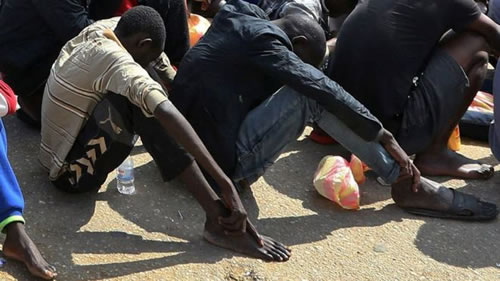 The African Diaspora Forum (ADF) learnt with shock and utter dismay that people are being sold as slaves in Libya.

Nothing could have come as a worse shock than learning that in the 21st century, the heinous trade in human beings, which was abolished centuries ago can still be practised by other human beings – worse in open-air slave markets, in our African continent.

As an organisation that partly exists to safeguard and protect human dignity, we were shocked to see footage from Libya, released recently by CNN, which showed young men from sub-Saharan Africa being auctioned off as farm workers in slave markets. We urge Libyan authorities, the African Union and the international community to intervene and stop this barbaric behaviour.

We call on authorities to ensure that a thorough investigation is opened immediately, to arrest those behind this kind of inhumane trade – both those selling and those buying fellow human beings and deal with them decisively. The investigations should also target the destinations and make sure those who have already been sold are accounted for, counselled and returned to their places of origin.

As members of the African Union (AU) and the European Union (EU) meet in Abidjan IN Ivory Coast this Wednesday 29th November 2017 for the African Union-European Union summit, we hope the two bodies will put this serious issue on the agenda, not just for talk, but also remedial action which will only stop the Libya debacle, but also prescribe sentences that will deter even those in other countries who may be contemplating doing the same.

Slavery was abolished and all those who seek a return to the era of degrading other human beings must be dealt with accordingly.

As the theme of the EU-AU meeting has the theme “Investing in youth for a sustainable future”, the best way the youth can be invested in is when they are given the dignity they deserve, not when they are subjected to inhuman acts like what is happening in Libya.

We hope the summit will address the issues that end up exposing Africans to treacherous economic environment that leave them desperate for life as refugees abroad, for this is where these slave traders get the leeway to trade in human beings.