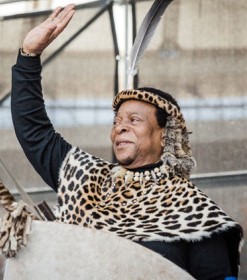 The African Diaspora Forum, the umbrella body of 35 migrants and refugees organizations in South Africa, conveys its heartfelt condolences on the passing on of King Goodwill Zwelithini.

The province of KwaZulu-Natal is home to several migrants and refugees from all over Africa, who have lived and worked there under the protection and welcoming hands of the Zulu royal family and citizens of KZN.

King Zwelithini’s passing on is a loss not only to the people of South Africa, but to migrants and the ADF as well. It is against that background that we convey our condolences to the Zulu royal family, AmaZulu nation, the South African government and all South Africans on this sad event.

King Goodwill Zwelithini was a great leader of the Zulu nation. He embodied the symbolism of what African cultures traditions, customs, belief systems and leadership can be and can achieve for the development of African people. As such, many of us looked up to him for guidance and wisdom for the preservation of the self-worth and pride of our communities.

The African Diaspora Forum is immensely grateful to His majesty for initiating dialogue between his nation and the Nguni nation of Zimbabwe in efforts to build peace and social cohesion among the Nguni descendants and their harmonious cohabitation with neighboring population groups in the SADC region. It is our hope that his work and legacy will live on and that future generations of Zulu kings will make his dream of unity among African people a reality.