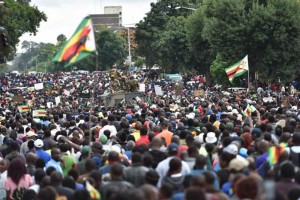 SOUTH African nationals have praised their Zimbabwean counterparts for shunning violence during protests calling for the resignation of Robert Mugabe in recent days.

The aged politician on Tuesday succumbed to pressure from a disillusioned public to quit following the collapse of the economy and a deteriorating political crisis.

Some three (3) million Zimbabweans have sought refuge in South Africa, a country which on the contrary to the prevailing atmosphere in Zimbabwe, has suffered deadly violence during anti-government protests.

Property has been burnt, businesses looted and human life lost during the incessant protests, which have been commonplace since the administration of President Jacob Zuma came to power in 2009.

Mehleketo Thuso Letlhake from Dobsonville in Soweto hailed Zimbabweans for maintaining discipline despite years of abuse by the Mugabe regime.

“I salute the people of Zimbabwe for achieving such a great goal without spilling blood or burning buildings. South Africans can learn a lot from this,” Letlhake said.

He spoke after a “bloodless coup” by the army, which occurred last week, set the tone for the demise of Mugabe’s reign of 37 years at the helm.

Lebogang Manicus also praised the resolve of Zimbabweans in the face of tribulation.

“From the military taking over power, to the people maintaining peaceful protests over the years, Zimbabweans have been smart in dislodging Mugabe, as South Africans take a leaf out of their book by desisting from violent protests,” Manicus said. 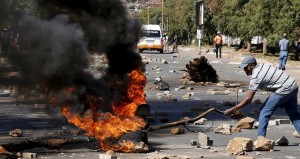 Ntombi Mtshaleka from Cofimvaba Eastern Cape, who witnessed the carnival atmosphere as Zimbabweans celebrated, said, “This appears a momentous day for Zimbabweans. One can see they are overexcited but still revel within the confines of the laws. If only we (South African) could be as disciplined through celebration and protests.”

“We also commend the restraint displayed by key institutions and ordinary citizens of Zimbabwe in what could have degenerated into an increasingly tense, protracted and troubled situation,” Parliament stated.