March Against Slave Trade and Human Trafficking in Libya 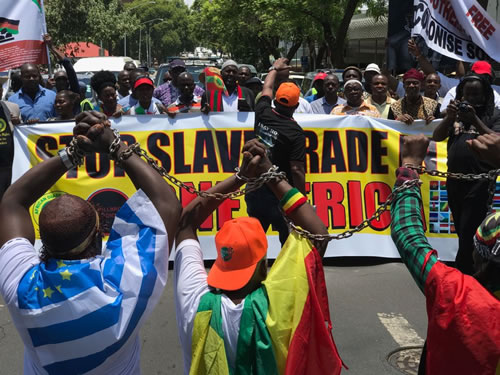 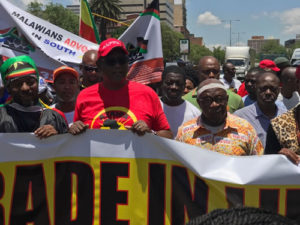 We the people of the world, on the African Continent, represented here in South Africa by the African Diaspora Forum (ADF), Faith denominations and community based organisations, trade unions platforms and concerned citizens of the world, have come to you to express our indignation with regard to the ongoing slave trade and human trafficking in Libya;

We the citizens of the world, hereby demand your immediate intervention to stop this crime against humanity.

Our denouncement and indignation:

FROM THE SOUTH AFRICAN GOVERNMENT: 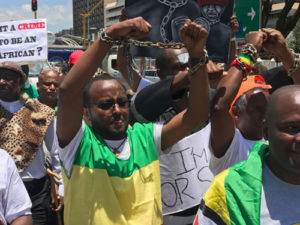 Intensify your public pronouncement to action. We demand an immediate stop to this inhumane acts on the part of the Libyan Government and their EU counterparts. South Africa, given your history and experience with apartheid and human injustice, it is our expectation that you will demonstrate ultimate leadership to denounce and bring a stop to this inhumane and barbaric practice.

FROM THE AFRICAN UNION:

This is the time for the African Union to show continental leadership and let the world know that we denounce and condemn this violation of human rights perpetrated against fellow Africans.

We demand that you demonstrate collective leadership and our concerns as Africans about the slave trade and human trafficking in Libya. We also demand that the African Union develops a consistent comprehensive and well-co-ordinated mobilisation programme that will free our fellow Africans in captivity. We hold you accountable for the freedom of the African people who have been held captive; The African Union to host an urgent meeting with the Libyan authorities to address the crisis.

FROM THE UNITED NATIONS:

We hold the United Nations accountable according to the Charter of the United Nations and the Universal Declaration of Human Rights of 1948, which seeks to”… reaffirm faith in fundamental human rights, in the equal rights of men and women and of nations large and small;

FROM THE PAN-AFRICAN PARLIAMENT:

As an oversight body for African governments, we urge you to exert pressure on the African Union, the North Africa Economic Region and the Libyan authorities to uphold values enshrined in The African Charter for People and Human Rights (The Banjul Charter);

TO THE LIBYAN AUTHORITIES:

FROM THE EUROPEAN UNION:

To protect the Human Rights and dignity of African Migrants. Allow safe, responsible and legal migration. African Migrants to be welcomed the same way we welcome the European tourists or businessmen in Africa. Protect African asylum seekers and refugees who are willing to enter Europe.

The European Union must organize a public forum with civil society organizations and social formations to explore and develop effective strategies and programs of action to deal with the crisis. We are calling upon the European Union to invest in our youth when they are still alive than when they are perishing in the Mediterranean sea.

Europe must know that the refugee crisis can be greatly scaled down when it stops supporting dictators on the continent and invading countries thus creating fertile grounds for terrorists, to operate in a safe haven, the case of Libya. We call on European governments as those who helped create chaos in Libya to do the right thing and partner with the African Union and other key stakeholders to ensure stability and peace is found again in Libya. This will be a first step to ending the shameful trade of human beings. The African Diaspora Forum (ADF) is prepared to work with the European Union to help bring an end to this atrocity and violation of human rights.