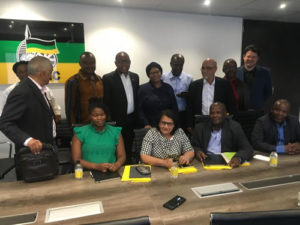 On Thursday, 12 September 2019, the African National Congress (ANC) met with leaders of the African Diaspora Forum (ADF) at Luthuli House.

The ADF conveyed the concerns of its members and proposed solutions to a number of immigration-related challenges. The ADF expressed its condemnation of any violations of South African law and, in particular, attacks on law enforcement officials.

The ANC reiterated its condemnation of any acts of violence and criminality directed against foreign nationals and South African citizens, and underscored the need to resolve grievances through engagement and dialogue. It emphasized its commitment to building a united Africa through the strengthening of political, social and economic ties between African countries.

The ANC also explained the concerns articulated by many South Africans and their desire to see the rule of law upheld, including on matters related to immigration and the conduct of business.

The ADF expressed appreciation for the principled stance taken by the ANC as well as the open and honest manner in which it explained these concerns.

The ANC and the ADF agreed to continue engaging in dialogue and to explore partnerships.

The meeting took place on the eve of an intensive engagement by the ANC National Executive Committee with citizens and ANC structures in Gauteng on violence against women and foreign nationals from 13-15 September 2019.