African Diaspora Forum donates to families in need during the confinement 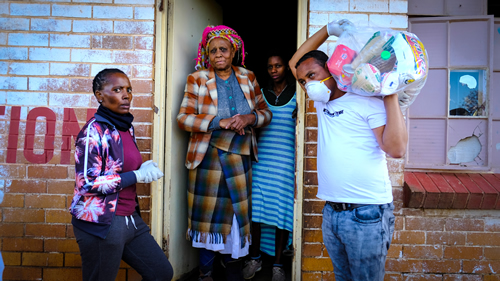 South Africans are urged to stay at home during the lockdown after the Corona Virus (COVID-19) has been discovered. On the 9th of April 2020 South African President Cyril Ramaphosa has announced the extension of lockdown to end of April. Ramaphosa pleaded with South Africans to make even greater sacrifices so that our country may survive this crisis and so that tens of thousands of lives may be saved. “we will use the coming days to evaluate how we will embark on risk-adjusted measures that can enable a phased recovery of the economy, allowing the return to operation of certain sectors under strictly controlled conditions”, Ramaphosa.

African Diaspora Forum (ADF) during this lockdown it has met with different communities to help vulnerable with food parcels. Today ADF leadership was at Dobsonville Soweto to handover food parcels. ADF Spokesperson Amir Sheikh Hussein said that “when the lockdown was announced by President we decided to assist the local communities that we reside with and we are very happy that Sowetan migrants business owners together with ward 47 & 48 councillors will hand over the food parcels to them”. Sheik Hussein added that 300 households received each food parcels worth R500 in Meadowlands and surrounding areas further more we have to distribute 1000 food parcels to migrants that reside in Mayfair and Inner City of Johannesburg. Ward 48 councillor Tshepo Nawane concluded by saying that this is what Africans is about, living together and assisting each other, someone who didn’t have food at all today will have something to eat today.

So far more European countries ease restriction during the COVID-19, the total number of global cases has surpassed 2.4 million, including more than 165,000 fatalities. More than 620,000 patients are reported to have recovered.