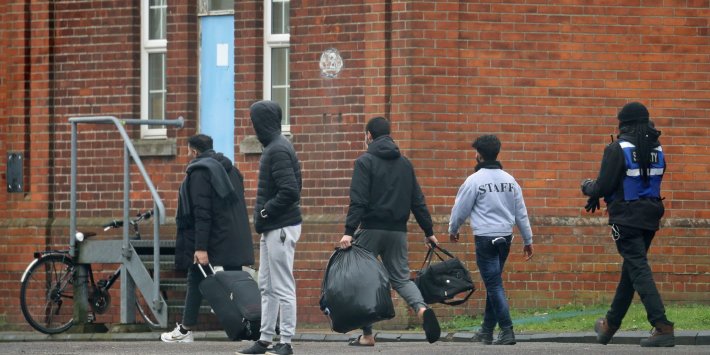 According to asylum seekers detained at the barracks, they have no access to medication and limited access to water and electricity. With Covid spreading rapidly, urgent measures are needed to protect an already vulnerable population.

The recent government announcement that coronavirus vaccines will be offered to asylum-seekers living in the UK, regardless of their immigration status, is welcome news. But there are more immediate human rights issues being faced by asylum seekers in the UK which need urgent Home Office attention.

It is worth remembering that there is nothing illegal in being an asylum seeker – those who seek asylum are exercising a legal human right which is protected by the 1951 Geneva Convention. Asylum seekers will typically have experienced trauma, war, torture, violence or worse and endured long journeys to reach what they hope will be safety in the UK.

So it is very troubling that asylum-seekers who had tested positive for Covid-19 were being detained in Napier Barracks, a disused military barracks earmarked for demolition, in Folkestone, Kent, alongside those without the virus, with no opportunity for social distancing. The barracks are supposed to be providing emergency accommodation for asylum seekers and are not a detention centre.

However, according to asylum seekers who are detained there, including those who have had a positive corona test, they have no access to medication or medical staff and are sleeping in cubicles cordoned off with bedsheets. They have limited access to water and electricity, limited or no heating and no means to cook food. As a consequence, the virus appears to be spreading rapidly among those unfortunate enough to have been detained there.

Bridget Chapman of Kent Refugee Action Network, who visited the barracks before it was locked down, said: “detention centres are grim places. But ironically, if these people were actually being detained at a detention centre, regulations would mean they would be treated better than this.”

No one can enter or leave the barracks, so even if an asylum-seeker were eligible for the vaccine, as announced this week, which given most of them are young men is unlikely to be the case at least before the summer, there would be no way for it to be delivered. Which is why it’s probably not the vaccine they need at the moment, it’s basic medication, like pain killers.

Urgent measures need to be taken to prevent the virus from spreading further among an already vulnerable population at increased risk of fatality, and beyond, to staff and the wider community.

The conditions in Napier Barracks are shocking and have been rightly criticised by the UNHCR and the Home Office Select Committee in recent days. According to NGO Freedom from Torture “Following the Covid-19 outbreak and the recent fire at Napier barracks, we believe that the conditions in what were already dangerously inappropriate accommodation, have crossed the threshold of harm to constitute inhuman and degrading treatment”. They add: “Quasi-incarceration inside a site where COVID-19 is transmitting freely is causing profound psychological distress to residents”.

Perhaps even more worrying still is that its conversion into a de facto detention centre is not unique. Similar detention centres are springing up elsewhere, suggesting a new Home Office policy which has neither been fully debated nor subject to adequate parliamentary scrutiny.

In answer to my question in the Lords this week the minister denied that conditions were unsatisfactory, however campaigners and journalists who have spoken to “inmates” dispute this.

During the ensuing debate there was almost universal consensus across the House that the centres are not fit for purpose. 35 prominent bishops have also added their voices and wrote this week to the Home Office asking that it to end the use of disused military barracks as accommodation for asylum seekers, describing the practice as “irresponsible” and “entirely inappropriate”.

Penally, a former Ministry of Defence training camp in Pembrokeshire, is also now converted for asylum seekers and last month it was proposed that Hassockfield Detention Centre near Durham be converted into another immigration camp. According to local campaigners opposed to the use of the Hassockfield Detention Centre, the Home Office has even declined their requests for guarantees that the centre will be single sex, will not be used for children and will allow visiting rights for the “inmates” once Corona restrictions are lifted. One campaigner said: “I am very, very concerned that it will basically be an internment camp”.

People who fled to this country to escape persecution, war and torture surely deserve better treatment than this. These detention centres should be closed.