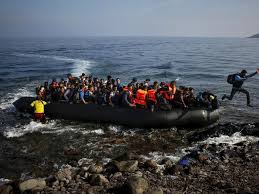 CAIRO (AP) — At least 15 Africans drowned when their boat capsized Sunday off Libya, a U.N. spokeswoman said, the second shipwreck involving migrants seeking a better life in Europe in just over a week.

Safa Msehli, a spokesman for the International Organization for Migration, said the dead were on a rubber boat carrying at least 110 migrants, who embarked from the Libyan coastal town of Zawiya on Friday.

The boat started to sink early Sunday and the Libyan coast guard managed to rescue at least 95 migrants, including six women and two children, she said.

Msehli said many of the survivors suffered from burns from engine fuel, and hypothermia, with some taken to hospital.

“It is an additional tragedy that in most cases, there is very little search to recover the bodies. The sight of bodies washing ashore later has sadly become too familiar,” she added.

Sunday’s shipwreck was the latest along the Central Mediterranean migration route. At least 41 migrants were reported dead last week, part of a group of some 120 migrants on a dinghy that left the North African country on Feb. 18.

The humanitarian group Sea-Watch said its rescue vessel Sea-Watch 3 in the central Mediterranean had 363 rescued migrants aboard, from five distinct operations starting on Friday.

On Sunday, it carried out three separate operations, including the rescue of 44 migrants whose wooden boat was about to overturn. The capsizing had been spotted by aircraft operated by the Moonbird humanitarian group, Sea-Watch tweeted.

Libya has become the major transit point for African and Arab migrants hoping to reach Europe, after the North African country plunged into a bloody civil war following a NATO-backed uprising that toppled and killed longtime ruler Moammar Gadhafi in 2011.

Smugglers often pack desperate families into ill-equipped rubber boats that stall and founder along the perilous Central Mediterranean route. Over the last several years, hundreds of thousands of migrants have reached Europe either on their own or after being rescued at sea.

Thousands have drowned along the way. Others were intercepted and returned to Libya to be left at the mercy of armed groups or confined in squalid detention centers that lack adequate food and water, according to rights groups.