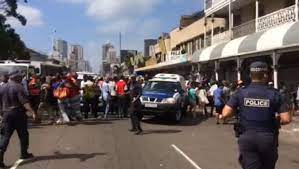 The SA Human Rights Commission says it is “deeply concerned” over violent attacks on foreign vendors in Durban that left several people injured and traumatised over the past two days.

Police and metro police responded to violent clashes in the CBD on Monday in which some businesses were petrol-bombed. Foreign nationals were also attacked on Sunday in the Soldiers Way Market trading precinct.

“The SAHRC condemns these ongoing violent attacks and the looting and threats on businesses owned by non-nationals in the city,” the commission said in a statement.

The commission warned that such acts were “unlawful and unfairly discriminatory and that they are motivated by incorrect beliefs that others have no human rights based on their social origins”.

“The commission once again calls on all within SA to respect, protect and promote the rights of all within SA as the constitution and the Bill of Rights, in particular, treat all within SA with equality and human dignity.

“The commission remains concerned and extremely disturbed by these xenophobic acts which serve only to heighten and exacerbate the existing racial, social and ethnic tensions in the city which has the potential to trigger further xenophobic incidents and attacks on non-nationals in other parts of the province as well as nationally.”

Sunday Times Daily reported that the attacks, allegedly orchestrated by members of the Umkhonto we Sizwe Military Veterans (MKMVA), saw two people assaulted and hospitalised on Monday. At least one vendor’s stall was burnt to the ground on Victoria and Albert Street in the CBD.

The SAHRC said it was engaging with various stakeholders to “fully assess and investigate the matter”.