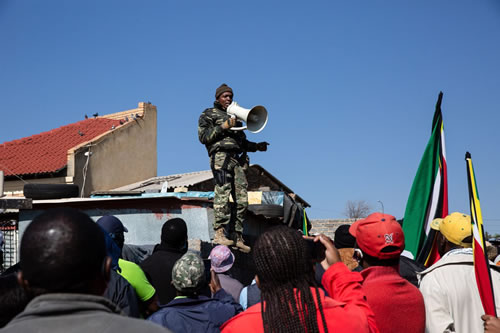 A ‘clean-up’ march through Soweto led to sporadic lootings of migrant-owned shops and the eviction of some residents. A countermarch opposed the xenophobes and the rhetoric that fuels hatred.

On the 45th anniversary of the June 16 uprising in Soweto, dozens of people armed with sjamboks and sticks met in Diepkloof, Soweto, under the banner of Operation Dudula. A poster about it had been circulating for weeks online, warning “We will be removing all illegal foreign nationals by force!!!” Similar posters doing the rounds contained even more inflammatory language and images. 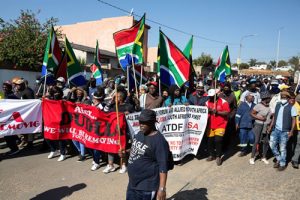 Flyers had also been hand-delivered to migrant-owned shops in the weeks leading up to Youth Day, which commemorates those who died at the hands of the oppressive apartheid forces on 16 June 1976 while protesting against the use of Afrikaans as a medium of instruction in schools. “We demand that you vacate of our business in our township. A 7 day notice is given to you as of today (sic)…” It was signed “Military Veterans and Umphakathi (the community)”.

Despite the poster’s crude and alarming xenophobic statements as well as the messages accompanying it when it was shared online, the organisers of Operation Dudula, which means “to push”, claimed on the day they gathered at the Diepkloof Hall that the group was not xenophobic.