The Africa Diaspora Forum, in partnership with the Community Media for Development (CMFD) Productions, and with the support of the Foundation for Human Rights, successfully organised the Migrant Rights are Human Rights pan African celebration held at the Yeoville Recreation Centre on the 21st of May 2011. The Pan-African concert brought together more than 600 people, representing the many Read more… 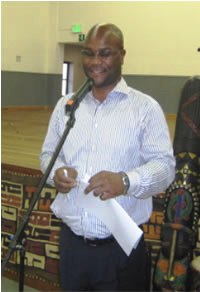 After their successful projects, including AFRICA WEEK FESTIVAL in Yeoville (May 2010), On 25 September ADF organized AFRICA HERITAGE INDABA event aimed to celebrate the diverse heritage of all people in South Africa and Africa.

like all attacks by people on other people, and is illegal and will be dealt with by the law enforcement agencies of the country. Other criminals are hiding behind xenophobia to perpetrate crime, but if the Police find them they will deal with them as the serious criminal. He encouraged also Migrants to be part of the CPF structure so that they can contribute to the fight against any kind of crime.

The Minister of Police was very surprised to see the commitment of ADF members to work for social cohesion and promise that the Inter-Ministerial committee on Xenophobia will explore possibility to work close with ADF. To bring various communities together to start to think African first, to create harmony between them because this is the only way they can succeed. 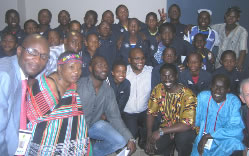 Bra Hugh Masekela (right) who spent almost 30 years in other African countries during Apartheid. In his speech he reminded the audience that the borders of Africa were imposed by Europeans in 1884-5 . These borders divided people who had lived together before. So it doesn’t make sense to reject and attack people who are historically your brothers and sisters.

We organized the event without any fund from any organization, individual or any South African official department, only member of ADF steering committee put together their resources, time, and effort to make it achievable and successful.

Initially the event was planned to start at 9am to 4.30pm, but because of lack of funds, we were obliged to remove some part of our event so that we can minimize the risk which made the event reliable. But during the event PROCKEY saw the effort made by the organizers to build a social cohesion without any support, donated to ADF a cheque of R11, 300.00 to help them to sustain their work.

Rather than a general statement on the generality of migration and its inevitability, several members of YSF and ADF shared their migration story. Amos Mbambo (YSF) told about his coming to Johannesburg from Kwazulu Natal and the prejudices and fears existing towards eGoli. Elisabeth Lethlaku (YSF) told about her stay in Uganda – the fears of South Africans that ‘Ugandan people eat foreigners’; prejudices and curiosity from Ugandans about South Africa; her mission to teach about Uganda when back in her home country, South Africa. Gabriel Hertis (ADF) told about his long wandering, to escape the Rwandan genocide, and how difficult it had been to find a place to call ‘home’ 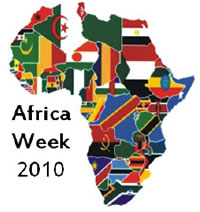 The African Diaspora Forum (ADF) and the Yeoville Bellevue Community Development Trust (YBCDT) are organising an Africa Week in Yeoville, 19-29 May 2010. The Africa Week is intended both to commemorate the xenophobic attacks that started on the 19th of May 2008, and to celebrate Africa Day on the 25th of May. It will be a week of cultural events, conferences, art and craft display, debates, culminating on the 29th of May in a festival in Rockey Raleigh. – See article in Yeovue news below

Date: 4 November 2008
Formed in May 2008 following xenophobic attacks across the country, the African Diaspora Forum (ADF) is an organisation that is dedicated to the promotion of unity in society between diverse peoples and the protection of the rights of all Africans. yeovue news speaks to Marc Gbaffou, chairperson of the ADF, about his organisation View document

Date: 22 April 2010 On 19 May 2008, xenophobic attacks began in Alexandra, Johannesburg and spread across the country. Within days, 66 people were dead and hundreds of thousands of rands of property destroyed. The news spread around the world, doing a lot of damage to South Africa’s image. On 25 May 2008 – six days later – the world celebrated Africa Day, a day which is supposed to celebrate African unity. This year – 2010 – there is a plan to hold an Africa Week to commemorate the events of 19 May 2008 and to once again honour the goal of a united African continent. Read full article…